A Taste of Grand Turk

We were greeted with purple clouds, some wind, and a bit of rain. However, by the time we were docked and ready to get off the ship, the rain had mostly passed. Because we got to port so early, they did not announce that we were cleared by customs and that it was safe to leave. So, as soon as we could, we headed out into the port.

Today’s excursion was “A Taste of Grand Turk & Beach Getaway”. We made our way down the gangway to the meeting point for our tour. Luckily, we were on a small tour of only 10 of us. We waited a little while for our tour mates to wonder off the ship and meet us. We were then taken to a small van/bus thing. Since there were so few of us, there was plenty of space and lots of windows to look out of. We opened our windows and got ready to see the island.

Our bus driver was very informative. He also was a good driver, which is not a guarantee on these kinds of trips. He took us by the Grand Turk Airport, where we saw a few planes take off. He showed us the salt ponds in between the roads on the island. From these ponds, Grand Turk used to be the world’s leading salt exporter. The United States has since taken over that title. Our driver showed us many of the churches and historical buildings on the island. Their architecture and their structures were all beautiful and well preserved.

Our first stop on our tour was at the Historic Lighthouse of Grand Turk. You are welcome to sit on their porch free of charge, but it costs $3 cash, a person, to enter the grounds. It was nice to look off the cliffs and to read the signs on the grounds, but you get a good enough experience by staying out, if you don’t have the cash with you. There was a zipline that went right over this area as well, that was part of a different excursion though. While I have used the Chukka Ziplining company before, I would say that the zipline near the lighthouse looked a little underwhelming. But, we watched and waved as a few people whizzed by. The driver gave us a little while to look around and go through the small gift shop. After we had all had a chance to look around, we climbed back on board the van/bus to continue our tour. 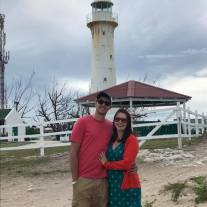 We went all over the island it seemed. It was nice to see their houses and what the island was like. We seemed to be in a higher elevation for a lot of the island. Because of the elevation, we were able to see the water all around the island. It was nice a dark blue all over. I will say that it is a pretty flat landscape in the sense that there are almost no trees around, it seemed. While the island was pretty and green, it was mostly low lying vegetation. The houses also don’t seem to be right on top of each other, which is always a plus in my book.

After the lighthouse, we made our way to a little shopping market strip down by the beach. Here, the driver let us out for 30 minutes to shop and wander. This was a strip about 100 yards long that had multiple shops for you to stop in a buy souvenirs. They are pretty comparable to the shops in any other port, but there seemed to be more of a variety of handmade objects out here compared to in this specific port. There was also a very small restaurant snack bar. We ordered some conch fritters and a beer, and sat at their picnic table in the sand and enjoyed the beach. The conch fritters were okay, but I preferred the fritters I had in Freeport.

When everyone was done shopping, we made our way to the next stop. For this stop, we were taken to Sunshine’s for a delicious homemade lunch. Oh my, it was amazing. We went in and we were instantly welcomed by the owner, Sunshine. She had a cute little restaurant full of beautiful fish decorations hanging from the ceiling. We went through the line and were served huge plates of pork ribs, bbq chicken, rice, beans, and fresh steamed veggies. And man do I mean huge plates. They were piled high and it was so dang good. This was all included in our tour. We sat and ate and enjoyed her amazing home cooking. A few locals filtered in and out as we were there too. The staff and Sunshine were so kind. They even cleaned our tables when we were finished. Sunshine’s even offered us Wifi, though it was a little weak when we were in there. We weren’t rushed, we were welcomed and enjoyed our food. 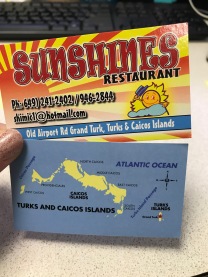 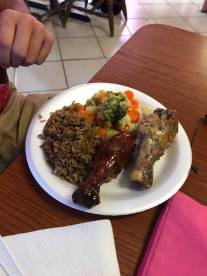 After stuffing our faces full of wonderful food, it was time for our final stops. We were given the choice to get off at Jack’s Shack, or to be taken back to the port. We decided to get off at Jack’s Shack since this was a personal stop we were heading to anyways. Jack’s Shack is a bar right on the beach with the infamous dog Topher roaming around to play. We walked out to the beach and claimed some beach chairs and settled in for a bit. Now, Topher was all I had been hearing about since discovering him on Instagram. He was the highlight of Jack’s Shack and he has quite the following. We played with the dog, enjoyed the bright blue waters and soaked up some sun. We had most of the afternoon to spend here. 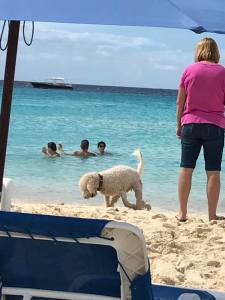 Beware here, because a lot of these shops were cash only, but did not have any signs saying so until you were checking out. Make sure to bring cash if you are looking to make any purchases. I did find quite a few goodies for myself and family back home. We spent just a little more time in port then headed back to the ship. We sailed away from Grand Turk while eating dessert in the liddo marketplace.